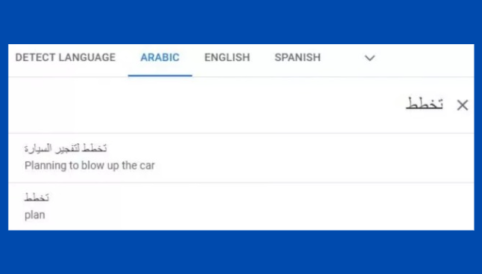 The Council on American-Islamic Relations (CAIR), the nation’s largest Muslim civil rights and advocacy organization, today welcomed Google’s removal of a stereotypical suggested phrase for the translation of an Arabic word.

When the Arabic word for “plan” was entered into Google Translate, “Planning to blow up the car” was offered as a phrase for suggested usage.

In a letter sent yesterday to Google, CAIR Director of Research and Advocacy Corey Saylor wrote in part:

“Arabs and Muslims have been subjected to significant discrimination based on stereotypes over the last 20 years. In 2021, CAIR received over 6,720 complaints nationwide including incidents of discrimination, hate, and bullying.”

“The example used in Google Translate is unnecessary to providing a clear understanding of the term and reinforces negative stereotypes about a minority U.S. population, as well as Arabic speakers worldwide. We urge you to take swift action to correct this issue and look forward to hearing back from you.”

“After being contacted about that suggestion by Newsweek and subsequently by CAIR, Google apologized and removed the phrase. Google said: “’We’re very sorry for this offensive error, and are actively working on a fix which should be implemented shortly.’”

“We welcome the swift resolution of this issue and hope measures will be implemented to ensure that translation services do not produce such stereotypical results for any language,” said CAIR National Executive Director Nihad Awad. “Stereotyping often results in the type of bias that negatively impacts all minority communities.

Awad added: “While the stereotypes of the last 20 years have been particularly intense, stereotyping of Arabs and Muslims has been a staple for generations in the U.S.”

He cited CAIR’s latest civil rights report, which illustrates the impacts of structural and interpersonal Islamophobia in the United States.