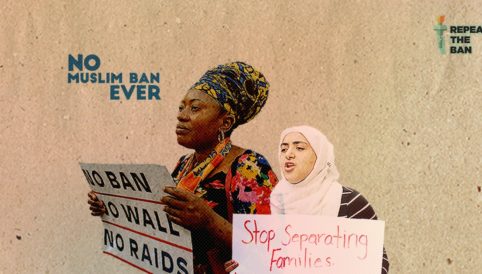 The No Muslim Ban Ever campaign, a coalition of progressive, faith, immigrant, asylum, refugee and civil rights groups, denounces the Trump Administration’s latest iteration of the Muslim Ban that will expand restrictions on additional countries to include Myanmar (also known as Burma), Eritrea, Kyrgyzstan, Nigeria, Sudan and Tanzania. The ban will continue to include Iran, Libya, Somalia, Syria, Yemen, Venezuela and North Korea.

The Trump administration continues to push white supremacist and exclusionary policies that discriminate on the basis of faith, national origin, and immigration status. In response, the Coalition’s anchor organizations released the following statements:

We long worried that what Donald Trump could do to one community, he could then also do to others. Today’s new expanded Ban proves this fear true. In addition to banning even more Muslim countries, this administration has gone further, banning immigrants from even more nations. We call on members of Congress to act now to support the current, comprehensive version of the No Ban Act and move to reign in the President’s bigoted immigration agenda immediately. Enough is enough.

From scapegoating Muslims with the Muslim Ban to now expanding the same restrictions to other immigrant communities of color, the Trump administration continues to weaponize immigration law in order to advance its xenophobic agenda. We will continue to defend the rights of our communities and work to repeal this cruel and discriminatory policy.

Today’s new ban is rooted in the same animus that was the driving force behind the Muslim Ban and reaffirms Trump’s cruel commitment to keeping out communities of color. Including countries that are not Muslim- or Black-majority doesn’t hide the reality that this new ban will impact Muslims and in particular Black immigrants the most. It’s imperative that we keep calling out these policies for what they are — attempts to change the complexion of our country and disenfranchise communities of color — and fight to repeal them in our courts and in Congress.

We continue to be outraged by this Administration’s actions to ban immigrants seeking a better life in the United States. Trump is fulfilling a white nationalist agenda on the backs of Muslim and African communities and we will not stand for it. All of our families deserve to be together.

About the No Muslim Ban Ever Coalition
The #NoMuslimBanEver campaign, endorsed by over 200 organizations, represents a diverse community of Muslim, Arab and South Asian organizations and allies in progressive, faith, immigrant, asylum, refugee and civil rights sectors who came together in response to the Trump Administration’s persistent efforts to ban individuals from Muslim-majority countries as part of its larger xenophobic, white nationalist agenda of exclusion. Please visit www.NoMuslimBanEver.com for more information.