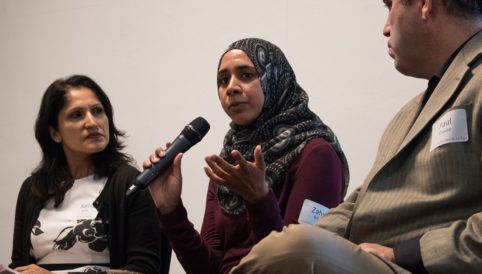 “Zahra Billoo, who was voted off the board of the Women’s March just days after joining the team, embodies what it means to challenge all systems of violence – fighting the patriarchy, resisting Islamophobia, and supporting Jewish people like me in a time of rising bigotry against Jewish people and all vulnerable populations” says Liz Jackson, senior staff attorney at Palestine Legal.

Right-wing critics have relentlessly smeared Zahra for daring to include Palestinians in her vision of justice. An army of trolls attacked her as anti-Jewish for naming Israel as an apartheid state that maintains a system of laws privileging the rights of Jewish people over Palestinians.

Jackson continues, “Rather than cut her out, the Women’s March needs to take a long hard look at Zahra’s example of principled insistence that justice is not for some of us – but for all of us. Because white supremacists are coming for all of us – Jewish, Muslim, Black, Brown, Asian, LGBTQ – and we have to defend each other.”