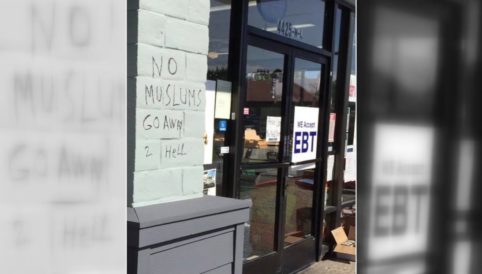 A woman is behind bars after admitting to spray painting anti-Muslim graffiti on the walls of a Muslim-owned business in Concord. “No Muslims! Go away to Hell” is one of the messages sprayed on the side of International Market and Grill in the 440 block of Treat Boulevard.

Concord police arrested Maria Disney, 58, a transient woman, who was identified from surveillance video. Sergeant Carl Cruz with the Concord Police Department described Disney as a “career criminal,” who confessed to the crime. He says she told police that she had an argument with a Muslim last week, and that’s why she did.

Zahra Billoo, the Executive Director of the Bay Area chapter of CAIR, says hate crimes and hate incidents against Muslims are on the rise, even here in the Bay Area.