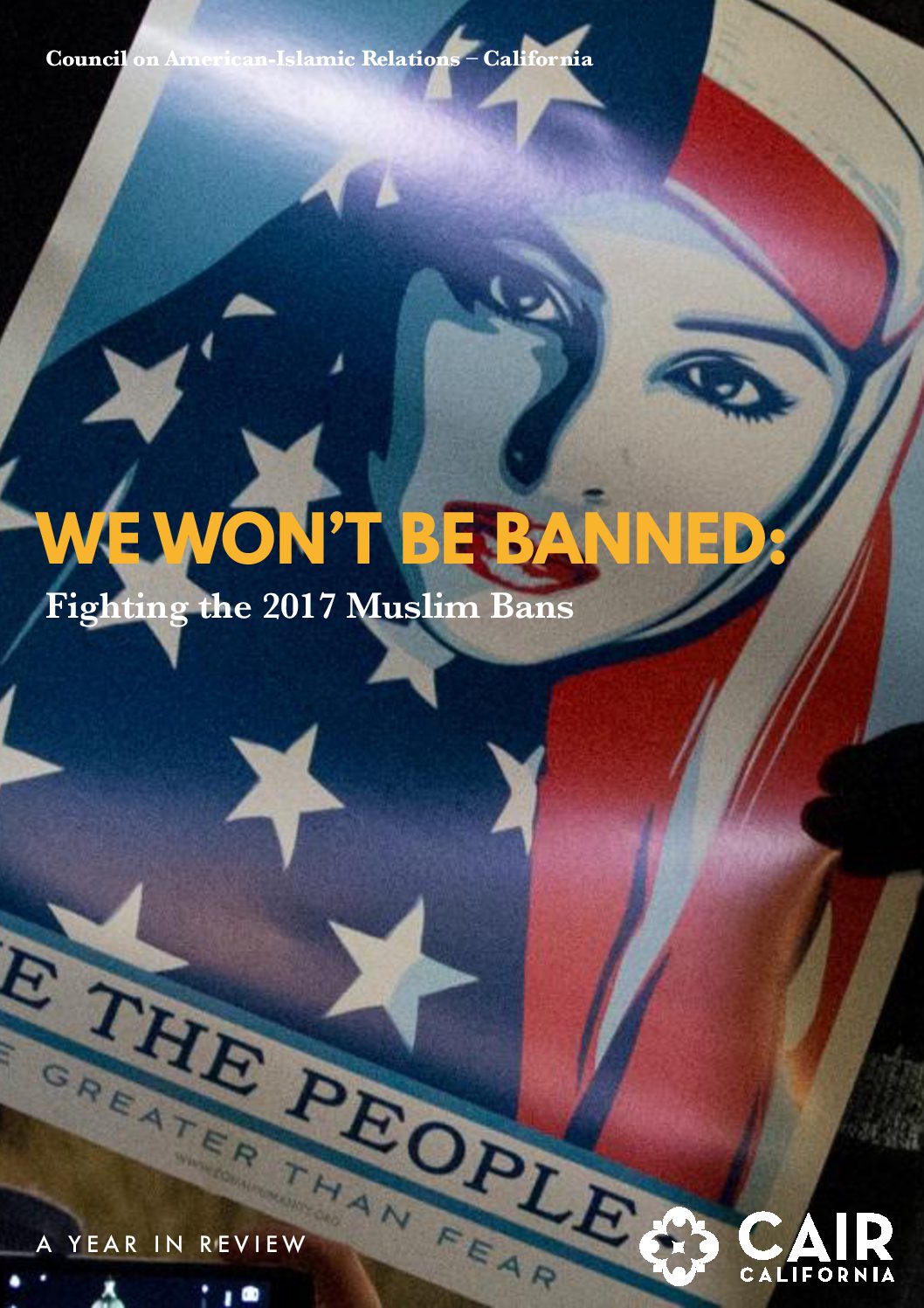 This report examines the impact of executive orders and a presidential proclamation targeting Muslim immigrants. Implementation of the first executive order (“EO-1”) occurred on January 27, 2017, in an unexpected and haphazard fashion. EO-1 banned foreign nationals of seven Muslim-majority countries for 90 days, non-Syrian refugees for a period of 120 days, and Syrian refugees indefinitely. Tens of thousands of people, including lawful permanent residents (“LPRs”) and dual citizens, were impacted by EO-1 through heightened questioning, delays in travel, cancellation of flights, and revocation of visas.

After continued legal challenges partially blocked implementation of EO-1, President Trump signed a revised order (“EO-2”) less than two months later, on March 6, 2017. Among other changes, EO-2 removed Iraq from the seven designated countries and lifted the indefinite ban on Syrian refugees. Legal challenges ensued immediately. Federal judges in Hawai‘i and Maryland issued orders temporarily blocking critical sections of EO-2 before its implementation. The administration appealed the orders to the U.S. Court of Appeals for the Fourth and Ninth Circuits. After both appeals courts refused to lift the bans on EO-2, the administration appealed those orders to the U.S. Supreme Court. In a June 26, 2017 decision, the Supreme Court partially granted the administration’s request to stay the Maryland and Hawai‘i U.S. District Courts’ preliminary injunctions, holding that EO-2 “may not be enforced against foreign nationals who have a credible claim of a bona fide relationship with a person or entity in the United States.” The Court also granted certiorari, consolidating the U.S. Court of Appeals for the Fourth and Ninth Circuits cases.

On September 24, 2017, the day on which the 90-day EO-2 ban on foreign nationals from Iran, Libya, Somalia, Sudan, Syria, and Yemen expired, President Trump issued a proclamation (“September 24 Proclamation”) that imposes new travel restrictions on the entry of foreign nationals from Chad, Iran, Libya, North Korea, Somalia, Syria, Venezuela, and Yemen. Unlike EO-1 and EO-2, these travel restrictions are indefinite, resulting in a much more far-reaching impact on foreign nationals from the listed countries and their families in the U.S. One month later, on October 24, 2017, President Trump signed an executive order ending the temporary refugee ban imposed by EO-2, and effectively suspended refugee processing and family reunification for refugees from Egypt, Iran, Iraq, Libya, Mali, North Korea, Somalia, South Sudan, Sudan, Syria, and Yemen, as well as Palestinians who lived in any of those countries. The executive order enacted “extreme vetting” procedures, which were subsequently challenged in the U.S. District Court for the Western District of Washington.

Like visa-holders from Muslim-majority countries, refugees, who are among the most vulnerable of immigrant populations, have been singled out as targets of the government’s “extreme vetting” policies. Those fleeing violence and seeking safe haven in the U.S. are subjected to “multiple interviews and . . . security vetting by nine U.S. law enforcement, intelligence and security agencies that check their backgrounds, social media activity and the reasons they fled their countries.” The vetting process alone for refugees can take up to two years, which can place defenseless individuals abroad at significant risk. Nonetheless, their lives have been placed on hold while the administration assesses further measures. These executive orders and the September 24 Proclamation, commonly referred to as the “Muslim Bans,” signify much more than our country’s shift to a closed-door immigration policy through a purported focus on national security. Over the past year, the administration has haphazardly issued orders without regard to laws or constitutional principles. Federal courts have consistently rejected the administration’s targeting of Muslim immigrants, holding that the administration’s targeting of refugees and immigrants from Muslim-majority countries is discriminatory and a violation of fundamental constitutional protections.

This report details the impact of EO-1 and EO-2 on callers who contacted one of the four California CAIR offices. Findings illustrate that Muslims, including U.S. citizens, have expressed apprehension about travelling. Two-thirds of callers expressed concern about traveling and reached out to CAIR offices to see if EO-1 or EO-2 would impact them. They also sought legal guidance to learn about their rights while traveling. Nearly 30% of callers faced some issues while traveling, and more than one-third of those facing problems were U.S. citizens.