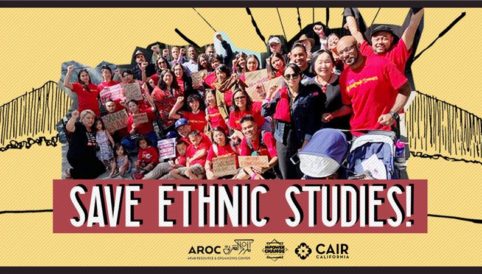 CAIR California is disappointed, but not surprised, to share that the California State Board of Education (SBE) chose to approve a whitewashed Ethnic Studies Model Curriculum (ESMC) that dilutes Arab American studies by erasing experiences with colonialism, imperialism, and removes any mention of Palestine. The curriculum has removed itself from the basic frameworks and guidelines of ethnic studies as a whole.

Despite massive unprecedented academic, community, and public criticism, the approved curriculum is a blatant capitulation to the demands of pro-Israeli extremist lobbyists and legislators, veering away from the original version of the ESMC – penned by teachers, students, community organizations, and Ethnic Studies scholars, including Angela Davis, Cornel West, and Marc Lamont Hill.

We share the disgust of the 20 Ethnic Studies educators who demanded that their names be removed after their original version of the ESMC was ignored and subverted.

“The vote by the State Board of Education showed it is more concerned with listening to the whispers of lobbyists and the voices of the oppressors than the cries of the oppressed. This version of ethnic studies casts out any mention of Palestine, but it cannot and will not erase the lives, experiences, and contributions of Palestinians.

“This is a reminder that there are still gatekeepers who deny minority communities the opportunity to have their complete histories shared and their authentic stories to be told.”

The erasure of Palestine was of particular concern to academics Dr. West, Barbara Ransby, Robin DG Kelley, and others, who wrote in an Open Letter from Black Scholars:

“One story that is vitally important to tell today is that of the Palestinians, Arab Americans, and Muslims. . . The absence of any mention of capitalism and its embedded racial structures combined with the minimizing of Arab Studies render the revised and watered-down version of the curriculum as clearly misaligned with the purpose and principles of the discipline.”

In fact, according to a letter signed by the Center for Constitutional Rights, the National Lawyers Guild Bay Area and other legal organizations:

“As a result of both the final product and the process to arrive at this draft, it is our belief that the ESMC does not currently meet the mandate set forth by AB 2016 (Alejo) and therefore should not be passed.”

The California Teachers Association voiced their opposition to the curriculum:

“Although we are pro-Ethnic Studies, California Teachers Association is unable to approve and give support to the current draft of the ESMC.”

“Today CDE has put on a production to mask the mass opposition to this curriculum,” said Lara Kiswani, Executive Director of the Arab Resource and Organizing Center. “CDE has chosen to continue to center whiteness and allow white rightwing interest groups to shape a curriculum intended on eradicating racism. The SBE has turned its back on the needs of California students,” she noted after the meeting. “But the tremendous solidarity we have built among educators, students, and communities will surpass this attack on our youth. The Save Arab American Studies Coalition remains committed to fighting for an anti-racist Ethnic Studies curriculum for all California students.”

While the fight has been lost, the struggle for recognition and justice is far from over.

We pledge to stand with our coalition partners and continue the fight throughout the state and within our local communities to ensure our students receive an anti-racist ethnic studies curriculum.