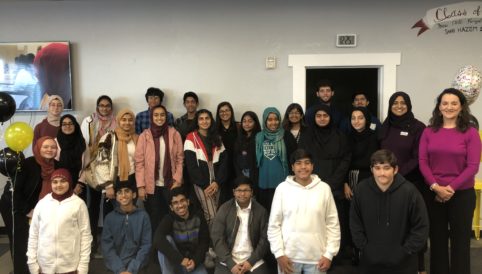 We are happy to announce that over the weekend, we celebrated the 2019 graduating cohort of the Muslim Gamechangers Network. 27 students joined by their families and program facilitators celebrated the successful completion of our 12-week social justice training program at a graduation ceremony hosted at Averroes High School.

From August through November, the students attended weekly interactive sessions hosted at Averroes High School to learn and practice with the tools that will equip them to become stronger community advocates and leaders.Together, they examined various subjects including American Muslim history, deconstructing and combating stereotypes, the concepts of power and privilege, economic justice and injustice, organizing a political campaign, building coalitions, and engaging government and media outlets effectively. They received training from activists and community leaders from across the San Francisco Bay Area.

CAIR-SFBA would like to thank Averroes High School for hosting the program. We are also very appreciative of the donors who helped make this program possible through their support, and the dedicated students who came back week after week to learn and grow together.

Support CAIR-SFBA’s Youth Empowerment Efforts
Your donation of $25, $100, $250, $1,000, $5,000, or any amount you can donate, will help CAIR-SFBA grow the work it is doing through the Muslim Gamechangers Network, Muslim Youth Leadership Program, and its anti-bullying advocacy and education. Support here.