Meet the Editors of the CAIR Blog 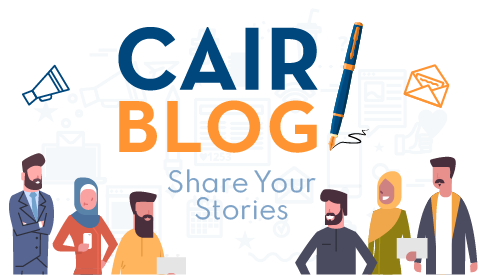 At a time when many of us are consuming more media and digital content than ever, it is important to find a space where people can share stories that are often unheard. We will bring you the words of CAIR community members by featuring personal reflections and experiences through this platform. The first voices are those of our Editorial Team as we share what draws us to this project while reflecting on current events.

At a young age, you are often told that if you set your heart to something, anything can happen. Although this is cliché, I believe that it is in fact true. For example, President Barack Obama began as a community organizer, made his way up to Senator of Illinois, and then became the first African American President of the United States. He was an inspiration to many, including me.

Being part of Generation Z, I am interested in meaningful social change. In each generation, there is a group of people who fight to better the nation. This also is the case with our generation. Gen Z has been heavily involved in a range of issues currently being addressed, while also driving discussion about the role of government institutions, equality, and much more. Some of these discussions are about actions pertaining to climate change and the Black Lives Matter movement.

Many in my generation are not old enough to vote, but have been incredibly active on social and political issues. Greta Thunburg, a teenage activist who became the face of the youth climate change movement, and Malala Yousafzai, who fought for girls education in Pakistan, are two examples. Along with all other age groups, advocating for change is something this generation is working towards, and change is not always a bad thing. Gen Z is not all iced coffee and social media, as we prove that we play a huge role in the future of this country.

As a third-year Communication Studies student at San Jose State University, I have been able to explore the different communication theories and ways that we give and receive messages. One theory that really fascinates me is Muted Group Theory, which explains the difficulty minority communities face in controlling and sharing our own narratives. While many events have made headlines recently, the challenges Muted Group Theory explain have been especially prominent during this election year.

While my ‘I Voted’ sticker will be mailed to me along with my ballot, it is important to embrace the unconventionality of this year’s election. Considering all of the events and challenges we have been met with, there is no better time to demonstrate our responsibility as voters. Whether we hope to enact policies to combat climate issues, or seek to protect access to healthcare for all, I am excited to vote in my first Presidential election and move forward from being an advocate for these socially significant issues to actively voting to support them.

As I share the narratives of my community through my writing and this blog, I also see voting as another way to become more actively engaged. I hope you will feel encouraged to vote and to uplift all voices in our communities!

Growing up in the Bay Area, I’ve always appreciated the diverse cultures and communities of people that live here. Alhumdulillah, there’s a large and active Muslim population across California, but sadly there are also relentless attacks on Muslims and other minority communities. As a Muslim American Pakistani, living in a post-9/11 America, I sometimes feel I’m not “American” enough. A feeling many members of Black, Indigenous, and people of color communities have felt for a long time. If 2020 has taught me anything though, I know for certain that America has and always will be the land of the Indigenous Americans and immigrants. Many immigrants have risked their lives for America only to be treated with discrimination and neglect and the solution was something I wanted to be a part of.

During my time in high school, all the seniors at my school were tasked with choosing a social issue for a year-long project. When brainstorming ideas, I knew I wanted to do a deep dive into Islamophobia in America. Zahra Billoo and the CAIR team as a whole were amazing resources and mentors for my project. It was then when I realized the severity and spread of Islamophobia and how much it impacts people’s daily lives. In 2020 and 2021, discussions of discrimination and violence towards minorities were brought back into the spotlight with the police murders of George Floyd and Breonna Taylor as well as anti-Asian violence spiking since COVID began. As an editor of the CAIR Blog, I hope to uplift these voices that have been silenced for so long and get a little bit closer to hopefully really making discrimination an important reminder from the past.

As a woman and current law school student, the recent loss of Justice Ginsburg weighs heavy on my mind almost as much as the process of how her seat was filled. When she enrolled at Harvard Law School, she was one of only nine women in a class of over 500. Now, women make up more than half of the law school population. The gap between what women can do and what women are allowed to do would have certainly swallowed up my opportunity to go to law school if it weren’t for the work Justice Ginsburg did.

And now, Justice Ginsburg’s seat has been filled, and there is a 6-3 conservative majority that will have a monumental impact on our rights and the constitutional government. Mitch McConnell said four years ago that Supreme Court seats shouldn’t be filled in an election year. But with the presidential election less than a week away, millions of Americans have already cast their votes, and a new Justice has been confirmed based on the double standard that is being used as a political ploy. The consequences will impact the rest of our lives.

We are all worried about what the future holds as we struggle with living in a pandemic, working and studying remotely, civil unrest, global warming, and the list goes on. But now as I move through my third year of law school amidst all this, I’m wrestling with the uncertainty of what the legal field will be like when I graduate.

Some weeks after the 2016 Presidential election, I had dinner with friends; we were talking about what we were going to do in the face of the despair, anger and fear we felt. I knew what I wanted my next step to be: to stand next to my Muslim brothers and sisters to fight Islamophobia in all its forms. I was raised in a politically active Jewish family in Pennsylvania and was familiar with the fear that pounded in my heart as I found the courage to speak up against oppression. But at that dinner, I did not yet have personal relationships with Muslims; I had only the desire to counter the hate and violence increasing in volume and scope combined with the knowledge that our liberation is tied together as Muslims and Jews.

I found CAIR and have been blessed to meet staff, volunteers, and community members who have great courage and integrity. Launching this blog is hopeful, to be able to build connections among the Editorial Committee, and with local Muslims and allies who want to tell personal stories that uplift and connect us all. I am honored to be part of this new blog project and look forward to hearing your stories.

Maryam, Yasmeen and Emily are CAIR volunteers and Courtney is the Programs Coordinator at CAIR-SFBA. Read their bios here.

Do you want to share your experience in a blog post? If so, please complete this submission form.

Remember to vote as early and safely as possible by mail or in person. Want to educate yourself and others as you vote? Check out our local and state voter guides and other resources at bit.ly/caircavote!