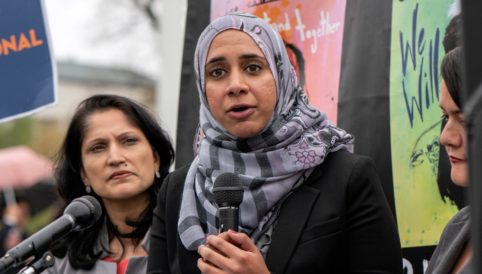 CAIR-SFBA firmly stands against any kind of antisemitism at the local and national level, and we will continue to do so. We also stand against Islamophobic and anti-Palestinian groups. As articulated below, we do not believe that criticizing Zionism or human rights abuses committed by Israel are antisemitism. As our Executive Director and a local civil rights leader, Zahra works hard to build strong ties with Jewish partners who are working to counter all forms of bigotry, including antisemitism and Islamophobia. We value the support and relationship that we have with the Jewish community and look forward to continuing to work together to help those in need.

Billoo is not antisemitic

Because Zahra Billoo gave a speech discussing the connections between Zionism and Islamophobia (“Prominent S.F. Muslim leader Zahra Billoo draws rebukes after warning about ‘polite Zionists,’” Dec. 8), the Jewish Community Relations Council has labeled her antisemitic. In doing so, however, they prove her point. By acting as if criticism of the politics of Zionism and its inevitable injustices is the same as hatred of the Jewish people and our religion, JCRC encourages its audience to condemn anyone who challenges Israeli policy.

A perfect example of this “Israel right or wrong” attitude is JCRC declaring it deplorable for Billoo to have questioned the feasibility of a two-state solution. Not only have actions of the Israeli government, such as approving the expansion of segregated Jewish-only settlements in Occupied Palestine and the criminalization of support for Palestinian rights, evinced their opposition to a Palestinian state, but Israeli government officials have openly declared that they are opposed to Palestinian autonomy. Human rights groups around the world, including in Israel, have condemned this posture. But JCRC calls it antisemitic to call for justice and democracy.

In her speech criticizing American Zionist organizations, Billoo made clear that she was not attacking them as Jews. Indeed, she called on her audience (American Muslims for Palestine) to continue to work closely with those Jewish organizations and individuals that call for an end to the Occupation.

Zionism is a political ideology. When Jews like me disagree with it because it has led to injustice, we are not antisemitic. By calling on our community to condemn those who criticize Israeli policy, and acting as if they speak for all Jews, JCRC actually draws the same connection between Zionism and Islamophobia as Billoo was highlighting.

ZIONISM IS NOT JUDAISM

I would like to respond to the email sent out by the JCRC on Dec. 7, and reported in the J. the following day (“Prominent S.F. Muslim leader Zahra Billoo draws rebukes after warning about ‘polite Zionists,’” Dec. 8), blasting Zahra Billoo, Northern California chair for the Council on American-Islamic Relations (CAIR), for supposedly antisemtic remarks.

There are more problematic issues contained in the JCRC’s statement than can be addressed within the 300-word limit requirement here, so perhaps this can be an opening of a wider discussion.

The JCRC labels Ms. Billoo’s comments as “dog whistle” politics, suggesting that one can replace “Zionism” with “Jews.” While the JCRC provides a definition for Zionism, it must be understood that there is no one accepted definition for Zionism and there are people of many faiths who use the term to mean a wide and often conflicting set of political, social, religious and spiritual ideals. Equating Zionism with Judaism leads to a gross mischaracterization of many progressive Jews who oppose repressive regimes wherever they operate, including Israel’s oppression of Palestinians.

The JCRC further states that “The speech was antisemitic and deplorable, seeking to divide and besmirch efforts at cooperation and coexistence.”

I would like to point out the work Ms. Billoo and CAIR have done in reaching out to all communities, including Jews. CAIR marched along with a Jewish contingent at the MLK Day march in San Francisco several years ago. Ms. Billoo, and other CAIR staffers have personally attended and addressed interfaith gatherings for social justice that included Jews and Christians (such as the Poor People’s Campaign and Faith in Action Bay Area), and have reached out to foster relationships with local synagogues, including attending services. This is exactly what cooperation and coexistence look like.

We see the attacks on Ms. Billoo as exactly what the JCRC decries: dividing and besmirching such efforts.

SEE ALSO: Why we stand by Zahra Billoo