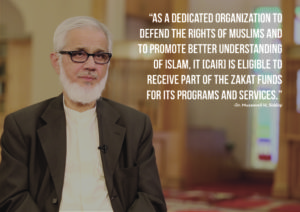 The Qur’an says about the expenditure of Zakat funds:

“Alms are for the poor and the needy, and those employed to administer the (funds); for those whose hearts have been (recently) reconciled (to Truth); for those in bondage and in debt; in the cause of Allah; and for the wayfarer: (thus is it) ordained by Allah, and Allah is full of knowledge and wisdom.” (Al-Tawbah 9:60)

Thus there are eight areas mentioned where Zakat money can be used:

The poor, the needy, those employed for zakat collection, those whose hearts are to be reconciled to Islam, those who want to free the slaves, debtors, those in the path of Allah, and travelers (rendered helpless).

CAIR is a well-known Muslim organization in America. Its mission statement says that its purpose is “to enhance the understanding of Islam, encourage dialogue, protect civil liberties, empower American Muslims, and build coalitions that promote justice and mutual understanding.” CAIR has been working for many years with this mission. It is dedicated to serve the cause of Islam and defend the rights of Muslim Americans. Therefore, its work comes in the category of ‘fi sabil Allah’ or the Path of Allah. This is a Qur’anic term that primarily means ‘the struggle to defend Islam and Muslims.’

As a dedicated organization to defend the rights of Muslims and to promote better understanding of Islam, CAIR is indeed eligible to receive part of the Zakat funds for its programs and services. We urge Muslims in America to support this organization through their donations, general charity, and through their Zakat. We pray that Allah subhanahu wa ta’ala continues to guide its workers to carry on CAIR’s mission with sincerity, patience, and prudence.