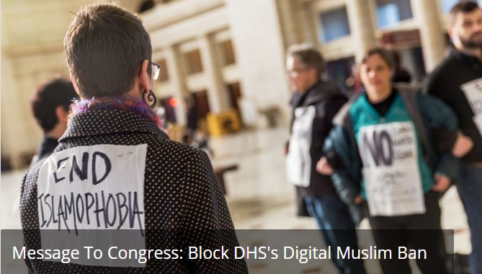 The Council on American Islamic Relations (CAIR) is urging all those who value their privacy rights and want the United States to be a welcoming and just nation to tell congress to push DHS to halt its proposed “Visa Lifecycle Vetting” program (Digital Muslim Ban) and prevent all taxpayer dollars from funding it.

Last January, when President Trump issued the executive order also known as the Muslim Ban, it included a little-noticed provision calling for every visitor to the country to be screened for whether they (1) would be “a positively contributing member of society,” (2) would “make contributions to the national interest,” or (3) intend to commit a crime or terrorist act. Not only is there no legal definition for these terms, but anyone wishing to enter the United States already undergoes extensive background checks.