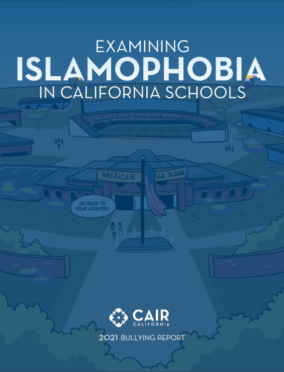 This report is the fifth biennial bullying report published by the California Chapter of the Council on American Islamic Relations (CAIR-CA). These reports evaluate the current school climate for California Muslim students between the ages of 11 and 18.

The purpose of this report, and the ones preceding it, is to understand the extent to which Islamophobia, the prejudice against or hatred of Islam and Muslims, manifests itself in the school environment in the form of bullying and discrimination from peers, teachers, administrators, and other adult school personnel.

In general, school bullying is understood as causing one to feel unsafe, fearful, or unable to fully participate in school. Bullying involves a real or perceived imbalance of power, with the powerful person or group attacking those who are less powerful. Bullying may be physical (hitting, kicking, spitting, pushing), verbal (taunting, malicious teasing, name calling, threatening), or emotional (spreading rumors, manipulating social relationships, extorting, intimidating). Bullying can occur in person or electronically through the creation and transmission of public posts, messages, texts, sounds, or images.

Youth involved in bullying – as both victims and aggressors – are more likely to experience depression, anxiety, and suicidal thoughts and behaviors than their uninvolved peers. The negative effects of bullying persist even after the abuse has stopped and are linked to a wide range of physical, mental, social, and economic challenges in adulthood.

CAIR-CA’s 2021 report is the result of a survey distributed between January 2021 and August 2021 asking Muslim students in California about their experiences with bullying and Islamophobia from August 2018 to August 2021.