CAIR-CA Looks Back at a Successful
Muslim Youth Leadership Program

(ANAHEIM, CA, 8/6/2018) – The California chapter of the Council on American-Islamic Relations (CAIR-CA), part of the largest Muslim advocacy and civil rights organization in the United States, completed its 14th Muslim Youth Leadership Program (MYLP) at the State Capitol in Sacramento. 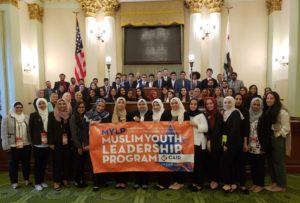 Aug. 5.  MYLP is an intensive retreat in Sacramento designed to introduce American Muslim high school students to the areas of media, law, and government – avenues that shape public opinion and public policy.

More than 40 high school students from across the state, including 12 from the greater Los Angeles area, participated in workshops on community organizing, leadership development and public speaking.

The participants, who have shown exemplary leadership skills in their own communities, participated in a mock legislative session, serving as legislators as they debated public policy issues and prepared bills to be presented on the State Capitol Assembly floor.

The mock legislative session allowed participants to gain a deeper, practical understanding of how bills are reviewed and laws are passed in the California legislature.

Nearly 500 California students have participated in MYLP since its first conference in 2005. Many of the program’s graduates have moved on to become community activists and have taken on groundbreaking leadership roles.