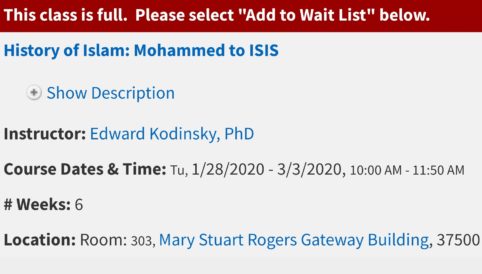 (LOS ANGELES, CA – 2/26/2020) – The Greater Los Angeles Area office of the Council on American-Islamic Relations (CAIR-LA) today decried an anti-Islam course taught at the Palm Desert campus of Cal State San Bernardino (CSUSB) and called for university administration to cancel the course and issue an apology.

The course, titled “History of Islam: Mohammed to ISIS,” is being taught by Edward Kodinsky, Ph.D. on the university campus through Osher Lifelong Learning Institute (OLLI). According to his biography, Kodinsky earned his Ph.D. in the State Scientific and Research Institute of Metal Processing.

In a slideshow from one of his lectures, Kodinsky falsely claims Arabs are not a moral people and that ‘lying and cheating’ are commonplace among Arabs because Arabs are all about ‘exploiting possibilities.’

“After reviewing a copy of a slideshow from one of the course lectures, I was shocked that a publicly-funded university would give space to the indoctrination of anti-Muslim tropes and xenophobia, creating an environment that views American Muslims as suspicious and alienates Muslim students and employees at Cal State Bernardino from their peers.

“Mr. Kodinsky has created a course curriculum based on a bigoted view of Islam, using books by Brigitte Gabriel and Ayaan Hirsi Ali – known Islamophobes and anti-Muslim activists – as source material.

“Mr. Kodinsky’s claims that Arabs are not a moral people and that ‘lying and cheating’ are commonplace among Arabs because Arabs are all about ‘exploiting possibilities’ show his intent in teaching this course is to promote stereotypes, hate, bigotry and xenophobia with the goal of pushing an anti-Islam agenda. By stigmatizing Muslims as inherently violent, anti-Semitic and distrustful, Mr. Kodinsky is creating an environment where the Cal State San Bernardino Muslim population can be the targets of backlash, harassment and hate crimes.

“We have seen a rise in complaints of concerned community members of incidents of Islamophobia both locally and nationwide. Classes like the one taught by Mr. Kodinsky encourage and embolden bigots in their speech, as well as their actions.

“We call for the administration at Cal State San Bernardino to strongly condemn such speech, not allow OLLI and Mr. Kodinsky to teach this course, clarify its vetting process for affiliated instructors and apologize for allowing such a course to be taught on its campus.”