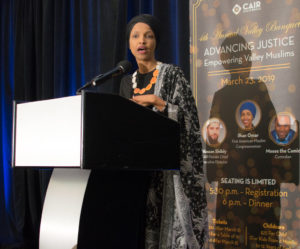 (LOS ANGELES, CA – 4/3/2019) – The Greater Los Angeles Area office of the Council on American-Islamic Relations (CAIR-LA) today condemned an anonymous bomb threat made in the days leading up to its 4th Annual Valley Banquet, which featured Rep. Ilhan Omar.

The Hilton Woodland Hills hotel, site of the banquet held on March 23, received an anonymous phone call from a woman calling from a blocked number threatening to bomb the hotel over allowing CAIR-LA to host Omar (D-MN), one of the first two American Muslim women elected to Congress.

Upon receiving the threat on March 19 – less than a week before the banquet – hotel representatives reported the call to police. According to celebrity news site The Blast, the caller left a message saying:

“What would you do if I told you your hotel was going to be bombed. That is exactly what’s going to happen if you allow the likes of Ilhan Omar into your hotel. She is a danger to American society and your hotel. You are not to allow her foot into there if you value your own safety. Do not allow her in there. Cancel the event.”

On the day of the event, a few hundred people – including notable Islamophobic agitators – protested across the street from the venue, which saw more than 400 American Muslims, civil rights activists and supporters attend. Congresswoman Omar has been the target of attacks due to her public criticism of the treatment of Palestinians by the state of Israel.

CAIR-LA Executive Director Hussam Ayloush confirmed CAIR-LA was made aware of the threat and worked with the hotel and law enforcement to take necessary measures to ensure the safety of Rep. Omar and everyone in attendance.

In a statement, Ayloush said:

“The current trend of normalizing hate speech has emboldened bigots in their speech, as well as in their actions. This has been most recently witnessed in the slaughter of 50 people at mosques in New Zealand by a white supremacist who, in his manifesto, lauded President Trump’s policies. It happened less than two weeks ago in Escondido, California – a suburb of San Diego – when someone attempted to burn a mosque down, leaving a note referencing New Zealand. We are thankful to God that Rep. Ilhan Omar and our guests at the CAIR-LA Valley Banquet were safe. We appreciate the vigilance of LAPD and its efforts to protect the event and guests.”

Police are investigating the message. Ayloush urged anyone with information to contact the Los Angeles Police Department.

“There is a difference between using your First Amendment right to express your opposition to an event and a threat of violence. Threatening to kill innocent men, women and children is beyond the pale, regardless if the threat was credible,” he said. “This type of behavior is unacceptable. We will not allow hatred and fear-mongering to prevail.”