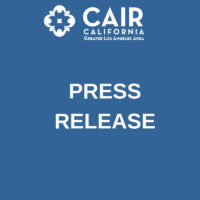 In an interview with the Los Angeles Times on Friday, Garcetti said, “I support the embassy being here.”

Garcetti’s comments came at the end of a week where he chaired a bipartisan delegation of American mayors visiting Israel with the American Jewish Committee’s Project Interchange to seek opportunities between their cities and Israel.

“It is highly disturbing that Mayor Garcetti would declare support for such a reckless decision made by President Donald Trump to move the U.S. embassy from Tel Aviv to Jerusalem.

“It is ironic and embarrassing that Mayor Garcetti is scheduled to host a Ramadan iftar on Monday evening with members of the Muslim community. The mayor spent the last week in Israel cozying up to a right-wing apartheid government and whitewashing its brutal and illegal occupation and gross human rights violations against Palestinians to explore business opportunities and then wants to entertain members of the Muslim community, as if nothing happened.

“As mayor of Los Angeles, Mayor Garcetti must represent all Angelenos, not just those who support Israel’s illegal occupation. We call on him to retract his statement of support and to stand against Trump’s reckless decision and hold a meeting with the interfaith community to discuss his statements.”

In a statement, Estee Chandler, founder of the Los Angeles chapter of JVP, said:

“Mayor Garcetti’s endorsement of the illegal move to consolidate Israeli annexation of land furthers the endangering of the lives of both Palestinians and Jewish Israelis on the ground. By recognizing Jerusalem as Israel’s capital, President Donald Trump endorsed Israeli policies of dispossession and forcible transfer, hindering the work for peace based on equality and freedom for everyone in the region.

“We join our interfaith allies in calling for Mayor Garcetti to reconsider his statements and retract his endorsement of President Trump’s immoral decision, which severely erodes our country’s credibility, legitimizes war crimes, undermines peace in that regions and stokes disharmony in our city.”

“The Episcopal Church has been on record since 1985 opposing the relocation of the Embassy outside of a comprehensive peace agreement between Israel and the Palestinians; a position that was affirmed in 1997 and again as recently as the 2018 General Convention.

“Moving the US Embassy only serves to inflame tensions with the Christian and Muslim Palestinians who have legitimate claims to the holy sites in Jerusalem and hopes that east Jerusalem will be the capital of a future Palestinian state. EPF PIN calls on Mayor Garcetti to reconsider his support for this dangerous and offensive action, and to apologize to his Christian, Jewish and Muslim constituents whose views and values he is also supposed to represent.”

“The move of the Embassy has resulted in increased violence against Christian and Muslim Palestinians living in the city, as well as in the West Bank and Gaza. FOSNA strongly believes that the status of Jerusalem is a matter for negotiations between the government of Israel and representatives of the Palestinian people.

“The Trump Administration’s decision to move the US Embassy undercuts our government’s reputation and ability to act as a trusted broker for a revived peace process. It also supports the racist intentions of the Netanyahu government and its supporters who would ethnically cleanse the Palestinian people from their homes in Jerusalem.

“We urge Mayor Garcetti to consider the implications of his support for the decision to move the Embassy from Tel Aviv, and to join FOSNA and other progressive organizations in supporting the Boycott, Divestment and Sanctions (BDS) movement as a non-violent means to punish business that profit from the Occupation and push the Israeli government back to the negotiation table.”

Tuesday marked the one-year anniversary of President Trump moving the U.S. embassy from Tel Aviv to Jerusalem and recognizing, on behalf of the United States, Jerusalem as the capital of Israel.

The decision violated the international status of the Holy City of Jerusalem and is considered by most U.S. allies and the international community as counterproductive to future peace settlement between Palestinians and Israelis.

The sacrosanct status of the city as holy to the world’s 4 billion Muslims, Christians, and Jews, and its central status to Palestinian aspirations to achieve basic human rights in their own land, was previously recognized by all countries of the world, including the United States.

Trump recognized Jerusalem as Israel’s capital in December 2017 and ordered the relocation of the U.S. Embassy from Tel Aviv to Jerusalem, a major U.S. foreign policy shift that was cheered by Israel’s right-wing government of Prime Minister Netanyahu.

CAIR-LA joined other CAIR chapters, a wide coalition of Jewish, Christian and other American interfaith groups in protesting the president’s decision. The decision sparked an international backlash from political leaders who warned that moving the U.S. Embassy to Jerusalem would pose a threat to the peace process between Palestinians and Israelis.

READ: Statement on President Trump’s Recognition of Jerusalem as the Capital of Israel