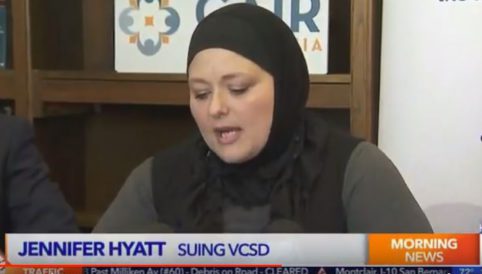 Jennifer Hyatt, 44, was arrested on Jan. 1, 2017, in Thousand Oaks, Calif., after being involved in a domestic dispute. At the Ventura County Jail, Hyatt was told by the deputies that she would have to remove her head scarf. Hyatt made several requests to continue wearing her hijab or be provided an alternative head covering.

“I was spoken to like I was trash and deserved everything that was happening to me while in custody,” said Jennifer Hyatt, the Plaintiff in the lawsuit. “My hijab was yanked off my head in front of many men despite my continued requests to wear it, I felt naked and humiliated the entire duration of my custody. I am seeking justice because I do still have the right to be a covered Muslim woman—even in jail.”