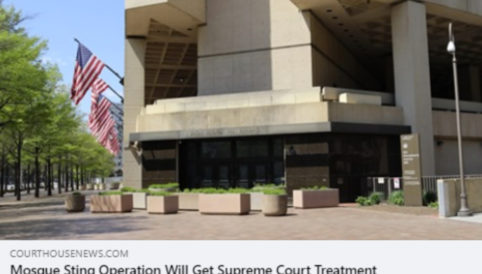 (LOS ANGELES, CA, 6/9/21) – The U.S. Supreme Court recently agreed to hear a case that the Greater Los Angeles Area office of the Council on American-Islamic Relations (CAIR-LA), the ACLU of Southern California (ACLU of SoCal) and the law firm of Hadsell Stormer Keeny Richardson & Renick filed more than 10 years ago.

That lawsuit was brought on behalf of three members of a local Southern California mosque, who were unlawfully surveilled by the FBI because of their religious beliefs.

Starting in 2006, the FBI sent a paid confidential informant to spy and surveil the Southern California Muslim community. The FBI directed the informant to gather information on the entire Muslim community, and to focus on individuals who appeared to be the most devout in their religious practices.  He met with specific targets and encouraged people to visit terrorist websites and tried to obtain compromising information that could be used to enlist other informants. During this time, the informant also targeted CAIR-LA, asking mosque attendees not to support the organization because it was “a sellout organization that is on the FBI’s payroll.”

“The FBI infiltrated several mosques in Southern California, planted informants and targeted American Muslims for illegal spying solely because of their religion,” said Hussam Ayloush, executive director of CAIR-LA. “The FBI’s actions were a clear violation of our Constitution and revealed that the FBI viewed, and continues to view, the American Muslim community as second-class citizens who are suspects until proven innocent.”

The FBI has attempted to shield its egregious actions and dismiss the suit brought by CAIR-LA and the ACLU of SoCal.  The FBI will be arguing to the Supreme Court that it should be able to avoid accountability for its unconstitutional targeting of the Muslim community because they claim these violations were in the interest of national security.  The FBI is making this claim despite the fact that this case arises out of surveillance that occurred nearly 15 years ago and that such surveillance efforts failed to produce a single-terrorism-related conviction.

CAIR-LA continues to defend the Muslim community against the unlawful actions of the FBI in this case and others where innocent Muslim community members are approached by FBI agents simply because of their religious practices and national origins.