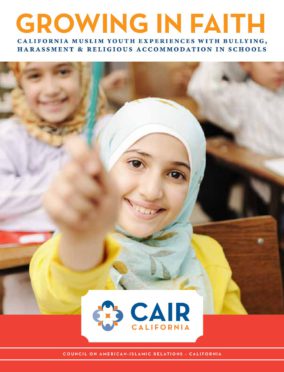 The California chapter of the Council on American-Islamic Relation’s (CAIR-CA) 2012 Muslim Youth at School
Survey was the first statewide survey to examine the experiences of American Muslim youth at school. It targeted
youth from across California and received responses from 21 counties. In total, 471 Muslim American students
attending public school between the ages of 11 and 18 responded to the survey, which consisted of 10 multiple
choice questions and space for comments.

Through the survey, CAIR-CA sought to better understand how comfortable American Muslim students felt
attending their schools and participating in the classroom. CAIR-CA also made it a goal to enhance its awareness
of the extent to which students were being bullied and their responses.
California’s Muslim students, for the most part, reported a healthy school environment in which they were
comfortable participating in discussions about their religious identity, believed that their teachers respected their
religion, and felt safe at school.

Most of the respondents came from areas of California with large and robust Muslim populations, such as Orange
County and Santa Clara County. This may account for the many responses we received from students who stated that
they felt confident and supported in asserting their Muslim identity at school. While many respondents indicated
that they simply internalized anti-Muslim name-calling from peers, such as “Osama Bin Laden” and “terrorist,”
many indicated that this did not have a long-lasting effect on them.

As evidenced by the findings in this report, there are still significant issues facing American Muslim youth at
school. The majority of school-related cases reported to CAIR involve teacher discrimination. Therefore, it is
significant that 18% of the surveyed students answered: ‘Strongly Disagree,’ ‘Disagree,’ or ‘Undecided’ when
asked about feeling comfortable participating in classroom discussions and 19% of students answered: ‘Strongly
Disagree,’ ‘Disagree,’ or ‘Undecided’ when asked if their teachers respected their religion.
More than 10% of American Muslim students reported physical bullying such as slapping, kicking, or punching.
Seventeen percent of the female respondents who wear a hijab, the Islamic headscarf, reported being bullied at
least once because of this. Most importantly, 50% of American Muslim students reported being subjected to mean
comments and rumors about them because of their religion. Additionally, more than 21% of students reported
experiencing some form of cyberbullying.

School bullying is a phenonmenon that affects students from diverse backgrounds and experiences, and American
Muslim students are not exempt from being subjected to harassment and discrimination at school. As Islam and
Muslims continue to be in the public spotlight, negative representations and assumptions in the public sphere
serve as obstacles to cultivating a tolerant, nurturing, and healthy school environment for all students.