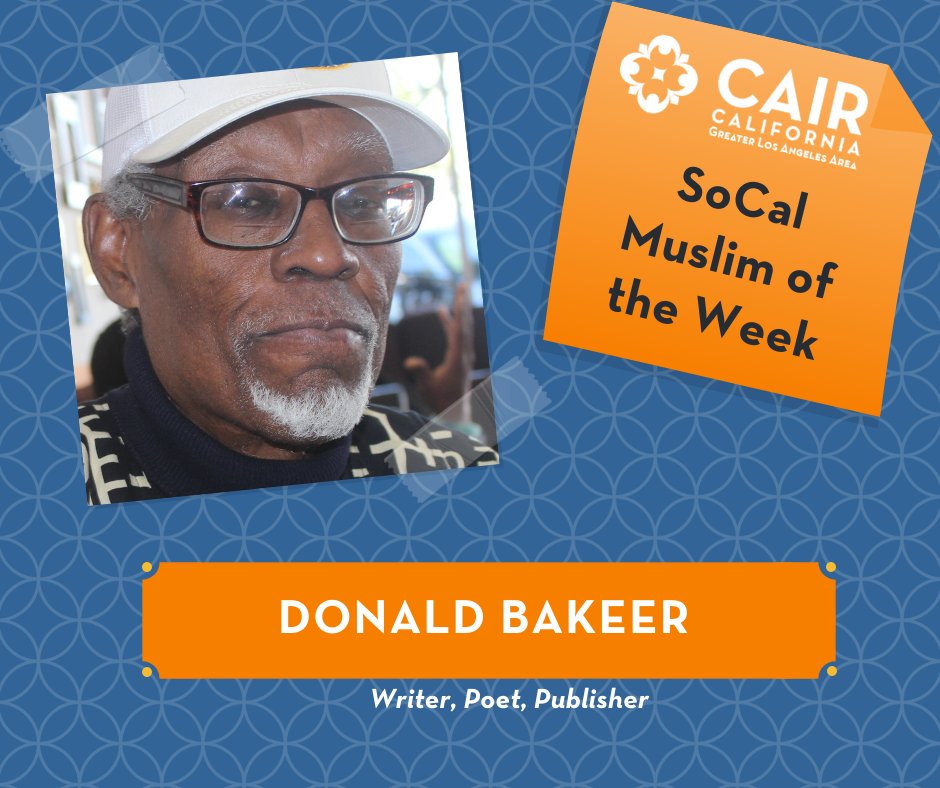 CAIR-LA is pleased to feature Donald Bakeer as the SoCal Muslim of the Week:
He suffers from post-traumatic syndrome disease, but it hasn’t prevented Donald Bakeer from channeling his energy into art. For decades, he’s been a writer, poet, publisher, filmmaker, school teacher, mentor, orthodox Muslim, bookstore owner, husband, father of 15 and old-school philosopher.
Bakeer is author of “PTSD! Who, Me?,” a book he shares his experiences of serving in Vietnam and his struggles with the disease. He is best known for his book “South Central L.A. Crips,” a 1987 novel about the gang wars in L.A. that was turned into the film “South Central” (Warner Bros.) in 1992. Bakeer spoke with more than 500 gangsters while writing the book.
He also has written “Inhale Gasoline & Gunsmoke,” a story that “chronicles the evolution of black L.A. from the Watts riots in 1975 through the 1992 South Central L.A. Rebellion,” and “I Too Can Create Light,” a memoir.
Bakeer is executive producer of “Muslimah’s Guide to Marriage,” a romantic comedy that won the Pan African Film Festival’s Audience Award this year. The film is written and directed by Bakeer’s daughter, Aminah Abdul Jabbaar Bakeer.
Bakeer spent the early 60s as a student at Howard University, where he got a taste of the civil rights movement and became a big fan of legendary activist Stokely Carmichael and the Student Nonviolent Coordinating Committee.
In 1965, he was drafted into the Army. When he finished his stint, he returned to Los Angeles and began a new relationship with his first love, writing.
Personal: Bakeer, 74, and his wife, Sharyn, live in Inglewood.
Last book read: The Quran
Quotable: “Islam saved my life. I was doing some very reckless things when I was fresh out of Vietnam. I was looking for people who could help. And I found most of them in the Nation of Islam.”