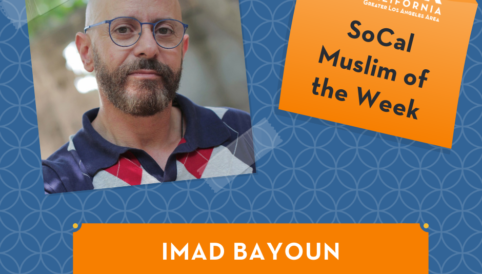 CAIR-LA is pleased to feature Imad Bayoun as the SoCal Muslim of the Week.

It’s a surprise sometimes Imad Bayoun has a chance to catch his breath.

“I just like to stay busy,” he says matter-of-factly.

Bayoun works as an insectary and quarantine officer at the Entomology Department at UC Riverside, teaches “World of Islam” and “Arabic calligraphy” courses at Cal State San Bernardino, serves as a lecturer for the Muslim American Society’s Greater Los Angeles Chapter and is the author of “Belief and the Human Mind,” which was released in 2016.

“(The book) was based on my second doctoral dissertation, in Islamic Studies,” said Bayoun, who is working on a second book he expects to be published later this year. “I choose the topic of my first book in order to answer my own questions, as related to doubt and religion. I expected it to be a book of a limited audience, so I wasn’t expecting to make big sales out it; but I’m pleased with the way it’s done.”

Bayoun also has published several audio series on an array of Islamic topics, including the “20 Principles of Islamic Understanding,” “Purification of the Heart” and “Muslim Character.” Some of his lectures are available at imadbayoun.com.

Last books read: “Muslim’s Character” by Mohammed Al-Ghazali and “There Is a God” by Antony Flew.

Personal: After earning bachelor’s and master’s degrees from the American University in Beirut, Bayoun received a PhD in entomology from Texas A&M University. Bayoun, a native of Beirut, resides in Riverside. He also has a PhD in Islamic studies from the Graduate Theological Foundation.

Quotable: “(My faith is) the way that I see everything, including myself. It’s a basic framework of perception of how I see the world, myself and the world around me. It’s really much of who I am, not just at some basic academic level, but on a day-to-day basis, as well.”