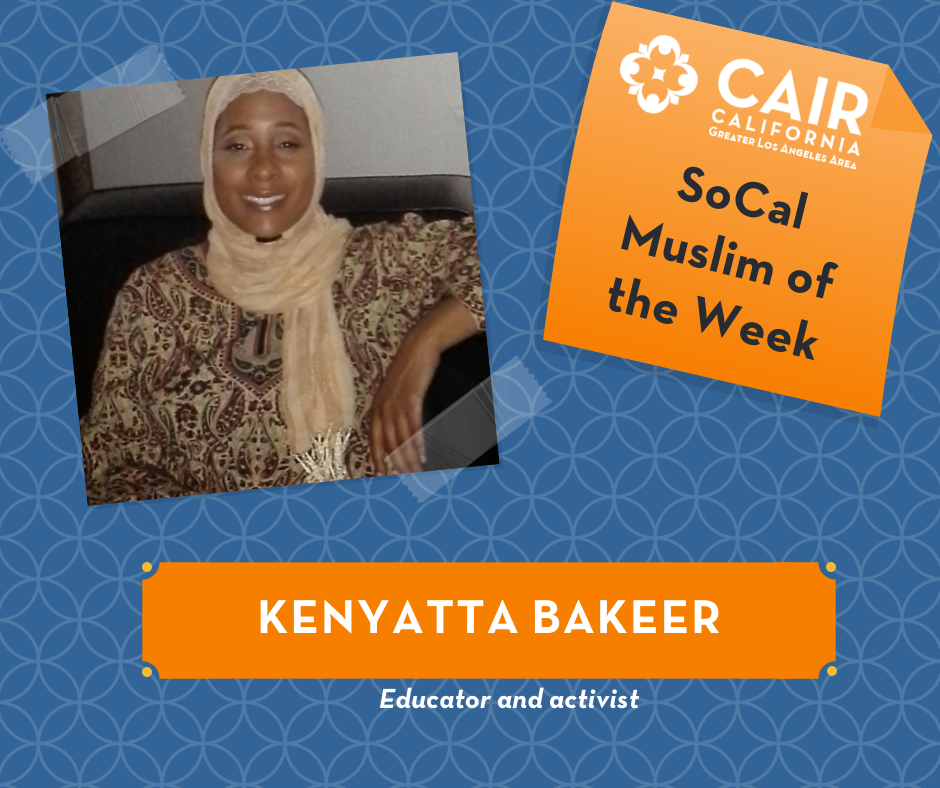 CAIR-LA is pleased to feature Hajjah Kenyatta Bakeer as the SoCal Muslim of the Week.

Kenyatta Bakeer-Allgood was raised with a foundation of Islam, education and activism by her parents, Donald and Sharon, in Los Angeles.

“My foundation of Islam comes from attending a Muslim school and being encouraged by my parents to seek knowledge from the cradle to the grave,” she said. “My parents encouraged me to study other religions and to learn about other people. I made my Shahada at 21. (Islam) has affected my life in a powerful way.”

She has kept true to her foundation, earning a bachelor’s degree in child development and a master’s in early childhood education from Cal State Los Angeles. She is currently pursuing a doctorate in interreligious studies at Bayan Claremont.

Bakeer-Allgood followed in her parents’ educational footsteps by helping to open several schools, including Islah Academy, a Muslim school that serves South L.A., a charter school in South Central L.A. and her own preschool.

She said her education and faith sparked her interest in interfaith work. She and her husband, Marcus, are members of L.A. Voice, an interfaith organization with more than 55 congregations that have been instrumental in changing Los Angeles for the better.

“I’m very fortunate to have married a man who is an activist,” Bakeer-Allgood said. “It’s very encouraging to have a mate who has that mindset.”

Part of her activism and work to educate others involves proudly wearing her hijab.

“It’s a weapon of my resistance,” she said. “I’ve had people give me strange looks. I go into spaces knowing that people will look at me differently. And I educate them.”

Personal: Married to Marcus Ishmail Allgood
Last book read: “The Art of War” by Sun Tzu
Quotable: (Being Muslim) has been very freeing. It makes me more open to more spiritual realms. I don’t bash people and say that they can’t be in my space.