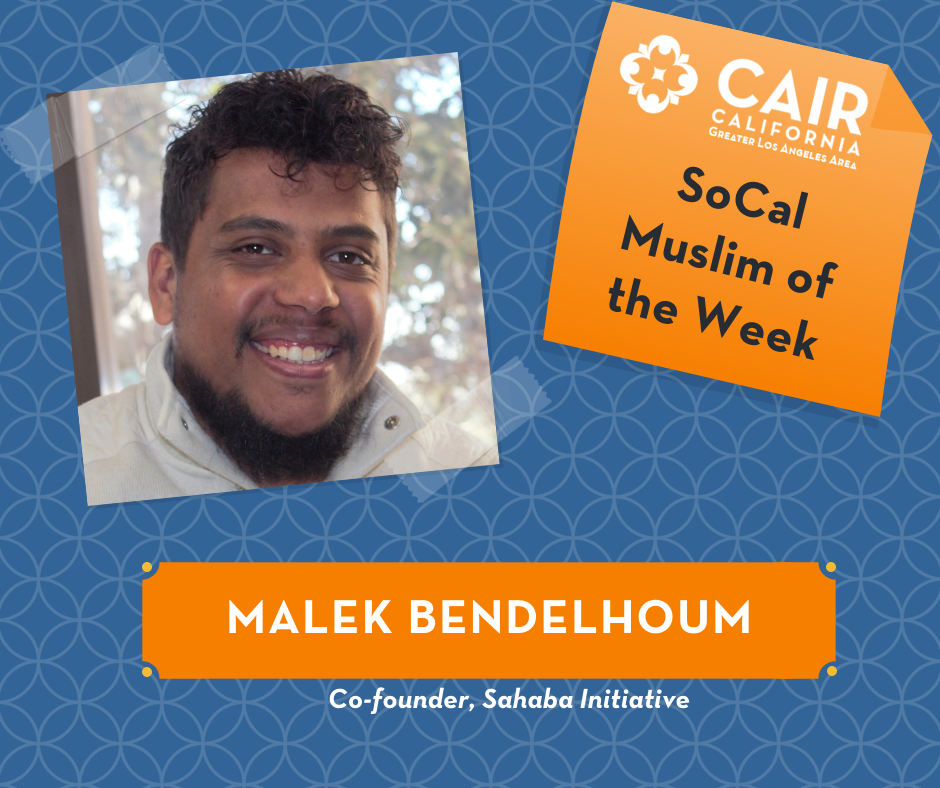 CAIR-LA is pleased to feature Malek Bendelhoum as the SoCal Muslim of the Week:

At 26, he became the youngest associate director of the influential Islamic Shura Council of Southern California. It fits a pattern for Malek Bendelhoum. His list of accomplishments is more suited for an individual twice his age.

He started college at 16. As a student at Riverside Community College, Bendelhoum co-founded the Sahaba Initiative, a nonprofit in San Bernardino that provides social and mental health services to low income families. The Sahaba Initiative was voted Nonprofit of the Year in California in 2018.

At the Riverside mosque during college, the initiative formed after Bendelhoum and his friends were inspired to help homeless people and others in need.

“We all knew each other, hung out with each other and we were always at the mosque together and we saw this need in the community, particularly in the Inland Empire,” Bendelhoum said. “That’s what it stemmed from. We were trying to figure out how we could make a difference.”

Bendelhoum, former director of the Islamic Center of the Inland Empire, is a board member of the United States Council of Muslim Organizations.

He’s received several honors. Last year, Bendelhoum, 29, was selected by Assemblywoman Eloise Gomez Reyes (D-San Bernardino) as one of the 30 most influential people under age 30 in her district.

Education: Bendelhoum is a graduate of UC Riverside with bachelor’s degrees in political science and forensic psychology.

Personal: Bendelhoum and his wife, Amanee, reside in Rancho Cucamonga.

Last book read: “The Art of Studying: An Islamic Approach to Academic Success” by Hateem Siddiqui.

Quotable: “God actually tells us in the Quran that we must bring people together. We have to bring each other together; we have to work together. It’s not only bringing Muslims together but bringing people of all backgrounds together.”