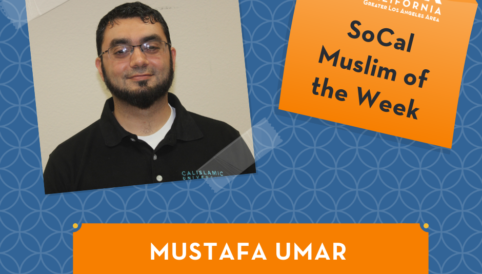 CAIR-LA is pleased to feature Imam Mustafa Umar as the SoCal Muslim of the Week:

Imam Mustafa Umar was finishing work on a master’s degree in the United Kingdom in 2011 when he pondered his next pursuit.

“I’m very good with technology,” he said. “And now that technology is available, I said let me launch my own online university. I’m supposed to be studying for finals but instead, I started programming.”

The idea resulted in Umar founding California Islamic University, where he continues to serve as director and a professor. To make matters better, a mosque in Fullerton offered Umar a position as its imam, which led to him establishing the physical location of the school on South State College Boulevard seven years ago.

Umar also is an author, penning several books about Islam. His first book – “Welcome to Islam: A Step-by-Step Guide for New Muslims” – helped lead new converts in the right direction.

“My motivation is I am passionate about helping people,” Umar said, adding that the book has been distributed internationally. “God blessed those books.”

Umar, 37, born and raised in Orange County, has a bachelor’s degree in information and computer science from UC Irvine, a bachelor’s in theology and Islamic law from the European Institute of Islamic Sciences in France and a master’s in Islamic studies from the University of Gloucester in the United Kingdom.

Personal: Umar, his wife and their two kids live in Anaheim Hills.

Quotable: “I write in a very simple language because I used to struggle a lot while trying to learn Islam myself. So, I always remember my own struggles. I never forget my own history. If I was struggling, and I grew up a little bit in a Muslim community, imagine what someone who has no idea what they’re going through? I try to make my books conversational style.”