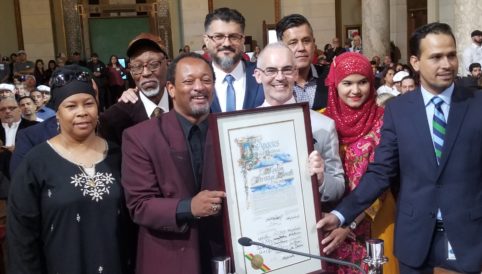 On June 28, the Los Angeles City Council adopted a resolution recognizing the contributions and activism of the Muslim American community and declared July 2019 as Muslim Heritage Month.

Council member Mitch O’Farrell introduced the resolution, citing the celebration of Muslim Heritage will “promote and encourage awareness of significant contributions made by the City’s Muslim population in culture, social services, education, politics, business, technology and the arts.”

An estimated 500,000 American Muslims reside in the Greater Los Angeles area. The City Council began recognizing its Muslim population in 2014 after being urged by residents, led by Najee Ali, CEO of Project Islamic H.O.P.E, an L.A.-based civil rights activist group.

O’Farrell honored Debra Hassan of the Center for Advanced Learning Public Charter School, Donald Bakeer of Project Islamic H.O.P.E. and Jarin Islam of Giving Help for their significant contributions to the Muslim community in Los Angeles through charitable contributions, social activism and aiding Muslims throughout the city.

The Greater Los Angeles Area office of the Council on American-Islamic Relations (CAIR-LA) co-sponsored a VIP reception and participated in the adoption of the resolution before the City Council.

“At a time when we feel the normalization of hatred in our country, we have witnessed a growing number of hate incidences, hate rhetoric targeting various minorities from migrants to workers to religious and racial minorities, it is extremely important for us to recognize the beautiful diversity of our cities and our country,” said CAIR-LA Executive Director Hussam Ayloush. “It’s beautiful to see that this heritage is being recognized. I remind myself that it is more than recognizing that diversity, but working on establishing it, strengthening it and working on preserving this harmony and justice.”