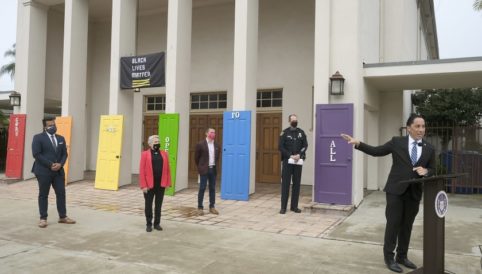 As Mayor Todd Gloria stated, “This was more than vandalism. This was an attack on our community.” he added that hate and bigotry towards anyone in the city will not be tolerated and those responsible for such acts will be held accountable.

“We appreciate the swift response by the mayor, the San Diego police chief, and other community leaders in condemning this act of racism. We hope that law enforcement authorities bring the perpetrators to justice. We also expect city leadership to show the same level of urgency in all future incidents of racism and hate.

“This incident should serve as a reminder that racial violence and prejudice against communities of color did not disappear with the removal of the previous White House administration. Unfortunately, there are many citizens who still harbor resentment toward communities of color, immigrants, and Muslims.

“It pains us to witness such racist incidents, especially during Black History Month, when we are focused on honoring Black Lives and their contributions to civil rights and justice.”

CAIR-SD is a Muslim civil liberties and advocacy organization. Its mission is to enhance understanding of Islam, protect civil rights, promote justice and empower American Muslims.