The second week of May included several congressional victories and prospects for the American Muslim community and all those people of conscience who support civil liberties and human rights for all people.

On Wednesday, May 7, the U.S. House of Representatives adopted House Resolution 418, a simple resolution, calling on the government of Burma (Myanmar) to end the persecution of its Rohingya minority and to respect internationally-recognized human rights for all ethnic and religious groups within Burma. 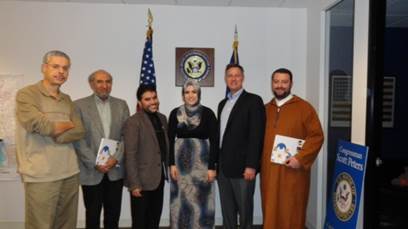 The resolution also calls on the United States government and the international community to put consistent pressure on Burma to end such persecution and discrimination.

Introduced by Rep. James McGovern (D-MA) and co-sponsored by 50 members of Congress, 36 Democratic and 14 Republican, passed by a majority voice vote.  CAIR San Diego met with several representatives locally and nationally to advocate for this resolution.  We want to thank our supporters for making it possible for CAIR San Diego to do such work.

For the past half year, CAIR advocated for the support and adoption of H.R. 418, issuing a final push action alert on Tuesday calling on American Muslims and other people of conscience to contact their member of Congress to urge support for the measure.

On Wednesday, the House Judiciary Committee passed the USA Freedom Act, a bipartisan reform bill that would reign in the NSA’s secret surveillance and bulk collection of Americans’ phone and internet records.

As amended by the committee the bill addresses the major issue of bulk collection of call records but fails to incorporate original proposals that – prevent broad collection of data through authorizing loosely defined “specific section term[s]” which could include entire zip codes (for example) –and limits the search of foreign communications containing the records of U.S. persons under Section 702 of FISA.  Other lingering privacy concerns also remain which will need to be address in the future by Congress.

Since the original bill’s introduction, CAIR has strongly supported the act as a means to restoring the privacy rights of all citizens.

CAIR has provided a “click and send” letter for all Americans to call on Congress to urge support for the USA FREEDOM Act and an immediate end to abusive and unconstitutional government spying programs. Please sign the letter to send it your representatives in Congress.

Today, Congresswoman Barbara Lee (D-CA) and Congressman Paul Broun (R-GA) introduced the bipartisan War Authorization Review and Determination Act (WARD Act), to reinsert Congressional oversight and determination into any future use of military force, as well as repeal the 2001 Authorization for the Use of Military Force (AUMF).

As Congress begins its consideration of the FY15 National Defense Authorization Act, the act will seek to “end the executive branch’s “blank check” for military action.”

“As the only Member of Congress to vote against the AUMF on September 14th, 2001, I have been deeply concerned about this overly-broad blank check for endless war,” said Congresswoman Lee. “I knew then, as I know now, that it gives any president the nearly unlimited authority to wage limitless war at anytime, anywhere, for any reason, in perpetuity. Regardless of how you perceive the AUMF, the fact remains that it is overly broad in scope and runs contrary to Congress’s constitutional role in war making and oversight.”

“The AUMF has been the underlying legal justification for countless acts of federal overreach and abuse, including: targeted drone killings of American citizens, broad warrantless surveillance and wiretapping activities, and indefinite detention. This attack upon our Constitutional liberties must stop – and I was pleased to work across the aisle to put forward a bill which would curb these instances of gross federal overreach,” said Congressman Broun. “While the AUMF originally passed in 2001 to allow the government to pursue Al Qaeda – it has expanded far beyond its originally intended scope. The WARD Act works to address this dramatic growth of power by restoring transparency and the Congressional oversight role. I urge my colleagues to work immediately to pass this common-sense, bipartisan bill.”

In the coming weeks and months ahead, CAIR will work to build citizen and congressional support for the WARD Act.