Take Action on the 3rd Anniversary of the Muslim Ban 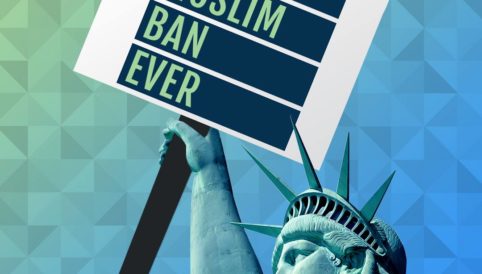 Today is the third anniversary of the Muslim Ban. On January 27, 2017, Donald Trump implemented his campaign call for “a total and complete shutdown of Muslims entering the United States.” In the three years since then, we have continued to work on the front lines, protecting the community from this discriminatory ban which has impacted thousands.

Members of Congress must act now to stand for religious freedom, and ensure that no president can discriminate against those with every right to enter the country based on religion, race, or nationality. Last June, we worked with our partners to introduce the No Ban Act (HR 2214/S1123). This legislation would terminate the Muslim Ban to better protect individuals from being denied entry based on their faith and limit the ability of future Presidents to impose similar bans.

On this third anniversary of the Muslim Ban, join CAIR-SFBA in taking action. Email your member of Congress and urge them to support the No Ban Act.

Earlier this year, the AP reported that “the White House is considering dramatically expanding its much-litigated travel ban to additional countries amid a renewed election-year focus on immigration by President Donald Trump, according to six people familiar with the deliberations…. seven countries — a majority of them Muslim — would be added to the list. Could include several countries that were covered in the first iteration of Trump’s ban, but later removed amid rounds of contentious litigation: Iraq, Sudan, and Chad.”

Whether a new Ban is issued today or at some later time, our staff will continue to work to protecting civil rights. As always, if you believe that you or someone you know has been the victim of racial or religious discrimination, or is in need of immigration assistance, please report it by filling out this form or by calling CAIR-SFBA at 408.986.9874.