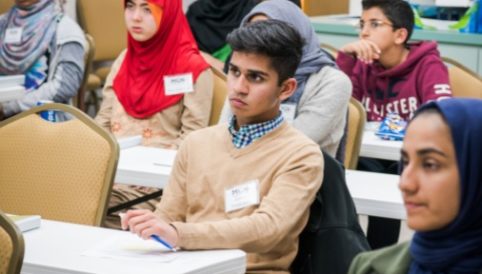 CAIR-CA’s report reveals that Muslim students are bullied at more than twice the rate of the national statistic.

The report, titled “Singled Out: Islamophobia in the Classroom and the Impact of Discrimination on Muslim Students,” is based on findings from a statewide survey of approximately 1,500 Muslim students between the ages of 11 and 18. This report is the fourth in CAIR-CA’s series of biennial reports documenting the rates of bullying of Muslim students in California.

Each report is based on a survey which asks Muslim students across the state about how they perceive their school environment and the type of bullying and/or discrimination they have experienced at school, as either a target or bystander.

According to the responses received for the new report, 40% of respondents reported being bullied for being Muslim, which is double the national statistic for students being targets of school bullying.

While 72% of Muslim students reported feeling comfortable letting others know they were Muslims, that percentage is down from the 2016 survey, when 77% of respondents felt the same.

In addition to analyzing gender-based differences, CAIR-CA also focused on age-based differences. The data revealed that high school-age student respondents were bullied at a higher rate than lower grades, with 48% of 12th-grade respondents reporting being bullied, the highest rate based on age/grade.

“CAIR-CA has continued to fiercely combat anti-Muslim bullying through legislative efforts and direct legal services, and we are happy to note that this report finds a slight decrease of anti-Muslim bullying in public schools,” said CAIR-Greater Los Angeles’ Senior Civil Rights Attorney Patricia Shnell, Esq., the lead editor of the report. “However, Muslim students still report bullying at alarmingly high rates, and there is a need to continue to advocate for students at the federal, state and district levels, so that everyone has uninterrupted access to their education, regardless of their religion or background.”

“While there has been a modest decline in bullying experiences reported by Muslim students, our new report shows that we have a long way to go make our schools safe and inclusive places for Muslim children, among others,” said Dustin Johnson, CAIR-Sacramento Valley/Central California’s (CAIR-SV/CC) civil rights attorney. “It’s shameful that nearly 1/3 of the Muslim children surveyed have heard offensive comments about Islam or Muslims in general from the teachers, administrators or other adults who are entrusted by our community to nurture and protect them.”

“I was in second grade when I first decided to wear a headscarf (hijab). Three days after my decision, a classmate attacked my new appearance by implying that I was connected to Osama Bin Laden. I returned to school four days later without my headscarf, fearing judgment in a place that should have been welcoming. I suffered the consequences of one day, one boy, one finger, until just last year when I finally decided to wear the hijab again. It took me 10 years to get over the shattering effects that bullying had. 10 years. I am one of many, but one of very few who decided to share my story. We need to take action to eliminate these stories entirely.”

The report also provides recommendations on how lawmakers, schools and parents can work to create safe and inclusive school environments.

CAIR-CA is a chapter of CAIR, America’s largest Muslim civil liberties and advocacy organization. Its mission is to enhance the understanding of Islam, encourage dialogue, protect civil liberties, empower American Muslims and build coalitions that promote justice and mutual understanding.