The Significance of August as American Muslim Appreciation & Awareness Month 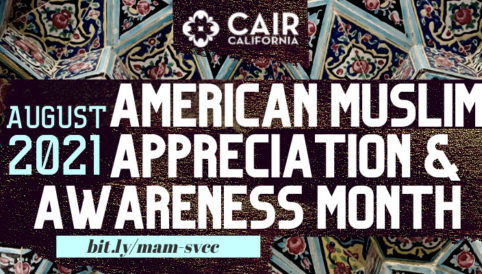 Now, nearly 400 years later, The Sacramento Valley and Central California regions host one of the most diverse Muslim communities in the United States with more than 150,000 Muslims and over 100 diverse mosques, religious centers, and community institutions. American Muslims pursue diverse professions and make rich contributions to the social, cultural, and economic vibrancy and fabric of the United States. They have distinguished themselves by fostering greater respect and understanding among all people through faith and community services. Muslim Americans have long contributed to the welfare, humanitarian, social justice, and community-building initiatives throughout the Sacramento Valley and Central California through founding grassroots organizations that challenge inequality and center people for community justice.

Nonetheless, American Muslims in California continue to face harassment, assault, and discrimination. In order to cultivate a welcoming cultural climate for all residents, it is necessary for our state and cities to embrace the diversity of our communities and afford everyone the opportunity to better understand, recognize, and appreciate the rich history and shared principles of American Muslims. It is appropriate to acknowledge and promote awareness of the many invaluable contributions of American Muslims in California and across the country and extend to them the respect and appreciation every American deserves. To that effect, City Councils across the Sacramento Valley and Central California have joined communities throughout the State of California in recognizing the month of August 2021 as American Muslim American Appreciation and Awareness Month.

We are proud to announce that in addition to a statewide resolution, the cities of Sacramento and Fresno issued local resolutions to the Muslim community. These resolutions are intended to affirm the contributions and impacts that local Muslims, Mosques, and organizations have had on the respective city and community.

CAIR-SV/CC also wants to take advantage of this visibility to celebrate our people as well, and especially those who may be invisible to the larger community. There is so much history in the Muslim communities of Northern and Central California, and it is imperative that we do our part to study, celebrate, and teach this history to our communities. We are hoping you can support our efforts by nominating a community member that you feel represents the Muslim community’s commitment to love, hope, power, service, accountability, and justice. Submit your nomination here: https://forms.office.com/r/j1jTis6qzk

As part of AMAAM, we have curated a list of 20 books that we feel represents the creativity, power, consciousness, and internationality of our community. These books are intended to help us enhance our understanding of ourselves and our community in the United States, and ground us in a necessary commitment to racial, economic, and gender justice.

We hope that you take this opportunity to learn, be challenged, and engage critically with the texts. For any questions or feedback, please don’t hesitate to reach out to us!