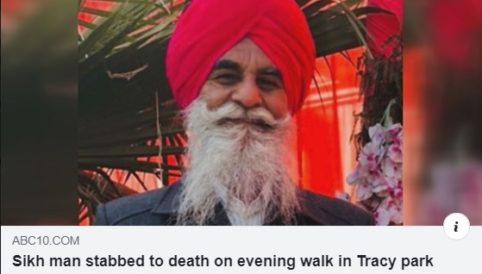 (TRACY, CA, 8/28/2019) – The Sacramento Valley office of the Council on American-Islamic Relations (CAIR-SV) today expressed solidarity with the Sikh community after a Sikh man was stabbed to death in Tracy.

Parmjit Singh, 64, was walking in his neighborhood near Gretchen Talley Park in Tracy when he was brutally attacked about 9 p.m. Sunday, according to reports. He died at the scene.

Police are seeking a man spotted on surveillance cameras running near where Singh was killed.

The community is offering a $1,000 reward for anyone who helps identify a suspect.

“We stand in solidarity with the Sikh community amid this heinous attack. We urge witnesses to come forward and help get justice for Parmjit Singh and his family.”

While investigators have not identified a motive, the deadly attack comes amid a rise in hate crimes nationwide.

CAIR has reported an unprecedented spike in bigotry targeting American Muslims, immigrants and members of other marginalized groups since the election of Donald Trump as president.

There was a 17.4 percent spike in California hate crimes from 2016 to 2017, according to a report by the attorney general.

Elkarra urged community members to report any bias incidents to law enforcement and to CAIR-SV/CC at 916-441-6269 or by filing a report at http://bit.ly/cairsvreport.